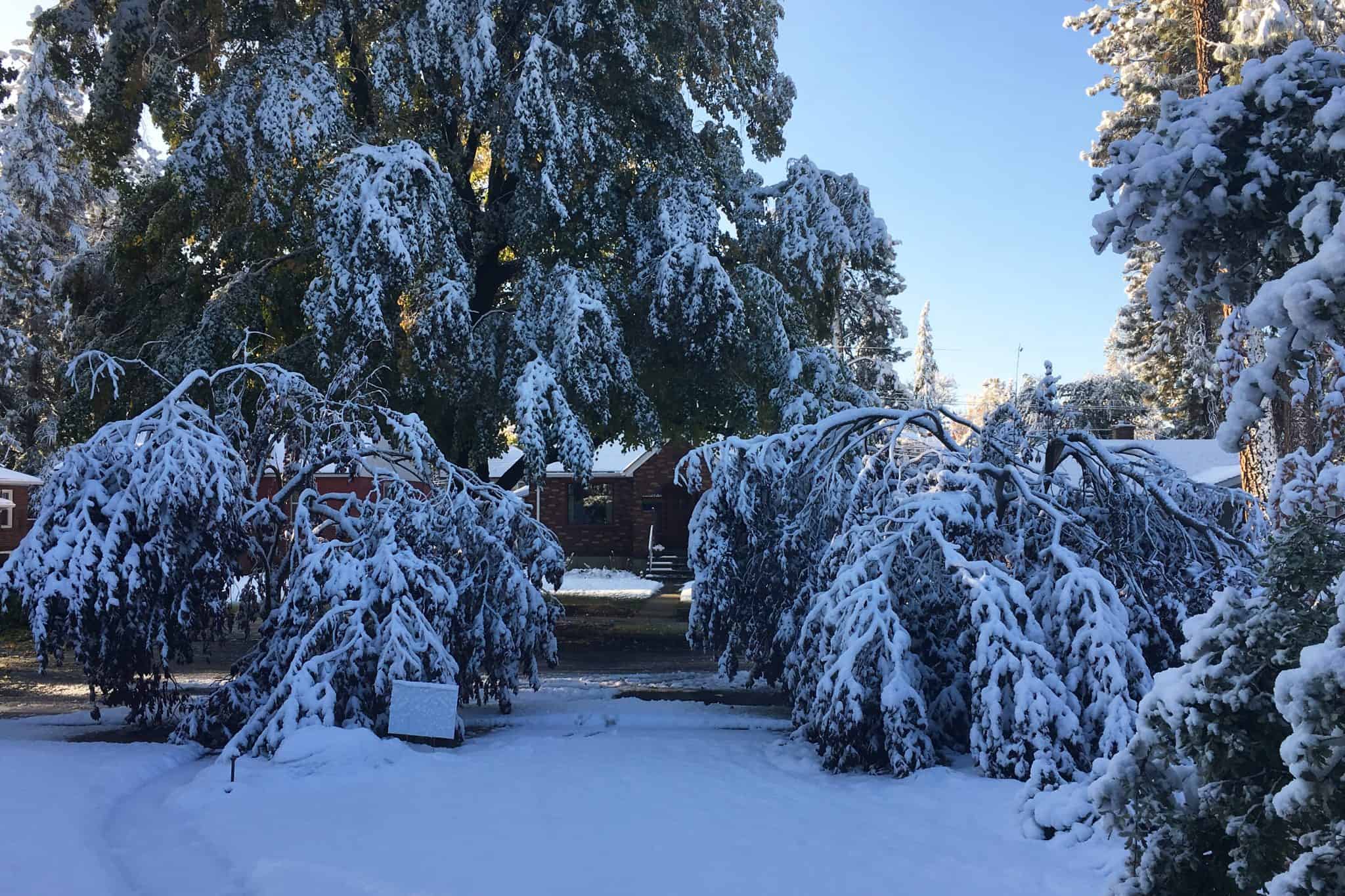 It was a typical Tuesday night as I left dance class, making my way up Spokane’s South Hill. Rain was gently falling, and the temperatures were rapidly dropping. I recall thinking the chill in the air was unusual for early October. Sometime around 1:30 AM I was startled awake by a thunderous crash as the house shuddered.  Peering out the window, I saw an enormous branch blocking my driveway and the neighbor’s entire yard covered in huge branches that had fallen from her maple tree. I also saw the two purple plum trees in my parking strip bent over as if their heads were nodding in prayer. Just then a loud explosion and flash of light illuminated the night sky. The transformer supplying power to our neighborhood blew, and I was without power. A familiar sense of dread settled into my belly. I wondered if we were in for another Ice Storm 1996, or a similar windstorm we had experienced and just a few years prior. In both storms our neighborhood was without power for nearly two weeks.

As the sun rose, my neighbors and I wandered out to survey damage from the night before. It wasn’t good. The central leaders on the two plum trees had split down the middle. Realizing they were a complete loss left me feeling heartsick and nauseous. My neighbor’s Norway maple had lost three major structural branches. Even more devasting was the damage to the allée of maple trees lining Manito Boulevard. After decades of neglect, the City had finally found resources to prune the trees last summer. I had watched the process with keen interest on my evening walks around the neighborhood. I felt sick witnessing the devastation, realizing that despite months of effort from the arborists who cared for the trees just a few months earlier, all their effort was literally erased in a matter of hours.

That same sick feeling surfaced one week later when I returned home from work, and the two trees were nothing but stumps. Despite bracing myself as I turned the corner that evening, the wave of emotion still caught me off guard.  My house looked naked.  Empty.  Lifeless.  I found myself pouring over decades of memories. The trees had been planted the year I purchased the house. I enjoyed watching them break dormancy every spring, their canopies bursting into the most glorious pink cotton candy explosion of color. By late summer tiny plums formed, and I’d see people in the neighborhood occasionally picking plums as they walked under their arching branches.

Twenty-eight years ago, the trees had been mindfully selected for their seasonal color and planted to frame the front door of my home—welcoming friends, family, and neighbors. I didn’t realize how deeply their loss would impact others until each of my neighbors came by to express how much they missed the trees, and that their grief was just as profound as mine. Those two trees had become something akin to sentinels that marked the passage of time, seasons, and memories.

Come spring 2020, the stumps and their tree rings that marked time will be ground out, and the holes left behind will be filled with new trees and new beginnings. I look forward to that day and the years that follow—marking time and creating new memories.

This error message is only visible to WordPress admins

Please go to the Instagram Feed settings page to create a feed.